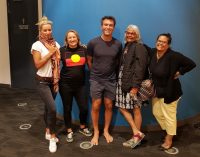 Our Aboriginal Practice Manager Jo Willmot sat down for a big yarn with tennis champion Pat Cash. Tackling the big questions early, Jo asks Pat, ‘What is an Australian?’

[This is a short article based on an in-depth interview between Jo Willmot and Pat Cash. You can listen to the interview here.]

Pat has been living in Europe for 30 years, but still identifies himself as an Australian, a land which he remembers by having clean air, beaches, nature; a place with benefits and opportunities. Pat recalls his parents always saying that a real Australian is an Indigenous Australian, and his early experiences of Aboriginal people was the beautiful art scattered around his family home.

“What you think is art is actually stories, they are complex stories”, Jo says. Challenging notions of Aboriginal representation, Jo continues, “These are the real Australians – but where are they? It’s easier talking about ‘them’ as nice people. It’s comfortable, and people are distracted by these ‘nice images’ of people that don’t exist.”

Even though Pat remembers, knowing about Aboriginal people – he doesn’t have many memories of them existing in his life. He remembers being friends with a kid at footy who was adopted and lived with a white family but never really questioned where his Aboriginal family were.

Pat took part in Cultural Fitness training, facilitated by Jo. Pat felt called to do the training; he needed to get more information and to understand for himself what was going on. In the training, he learned what really went on during colonialisation and the ongoing effects for Aboriginal people. He had no idea. He remembers thinking, “this is not the same country, surely!”

“I’ve accepted the fact that  I wasn’t around when the Europeans came in or the British government did this, I can’t take responsibility for that, but all I can do is help.”

Jo then raises this point for thought, “I think it’s really interesting how you say you’re not responsible for what happened at the beginning… but the beginning is a continuum because that beginning was a displacement of Aboriginal people’s right to live their life… you’re living the benefits.”

“We already know… something in it is unjust – perceptions, there’s inequity about access to services, being able to have opportunities – there are invisible walls and we need to work out how we challenge those walls and look at the history of what happened in this country.” Jo says.

“I think that’s something you can help Aboriginal people with, help create their own hero, where they’re not actually being wiped, they’re being proud and dignified with them being themselves,” says Jo.

To hear the rest of the in-depth interview between Jo Willmot and Pat Cash, please go here.