Relationships Australia South Australia supporting you through change.
You are here: Home > The 12th Anniversary of the National Apology to The Stolen Generations
Posted on February 13, 2020 in Uncategorized, Adult Health & Wellbeing, Communities, Aboriginal and Torres Strait Islander, Counselling, Relationships 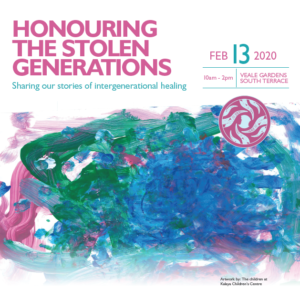 On 13 February 2008, The Australian Government formally apologised to Aboriginal and Torres Strait Islander Australians, and in particular to The Stolen Generations.
The National Apology was born from a report titled ‘Bringing Them Home’, which contained some 54 recommendations on redressing the wrongs done to Aboriginal and Torres Strait Islander peoples and healing the great pain suffered by many survivors of The Stolen Generations.
Recommendations 5a and 5b suggested that Australian Governments and police forces acknowledge responsibility for past laws, policies and practices that so greatly damaged Aboriginal and Torres Strait Islander peoples, and that on behalf of their predecessors officially apologies to Indigenous individuals, families and communities.
The Prime Minister, Kevin Rudd delivered the Apology at 9 am on 13 February 2008. He began by acknowledging Indigenous peoples as “the oldest continuing cultures in human history.”
Australians across the country watched the Apology. The Prime Minister spoke of the wrongs governments had inflicted on Indigenous peoples, and said sorry.
“For the pain, suffering and hurt of these Stolen Generations, their descendants and for their families left behind, we say sorry.
To the mothers and the fathers, the brothers and the sisters, for the breaking up of families and communities, we say sorry.
And for the indignity and degradation thus inflicted on a proud people and a proud culture, we say sorry.”
Rudd also spoke of the path towards “a future where all Australians, whatever their origins, are truly equal partners, with equal opportunities and with an equal stake in shaping the next chapter in the history of this great country, Australia.”
This path is long and difficult, though there are many strong and capable Indigenous and non-Indigenous people to lead the way. The Uluru Statement from the Heart is a major contribution to this journey, as are the efforts of many Indigenous peoples to reclaim and reawaken their language, culture and land. However, as reports such as The Family Matters Report shows, there is still a way to go until Aboriginal and Torres Strait Islander children have equal opportunities to thrive, Indigenous families are given the support they need, and Indigenous communities have an equal stake in shaping our shared future.
Today when we honour the survivors of The Stolen Generations, but we also make a commitment to listening to and learning from Indigenous leaders, and walking beside them towards the future promised by The National Apology to The Stolen Generations 12 years ago.


We want to know what you think about our website.

Help us improve your online experience by taking our short 3 minutes survey.