You are here: Home > Say No to Domestic Violence
Posted on November 24, 2014 in Adult Health & Wellbeing, Communities, Couples & Families 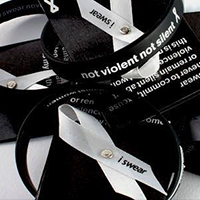 On Tuesday 25 November, Australians will join together to show their support to put an end to violence against women.

In Australia, an average of one woman a week is killed by a current or former partner. Relationships Australia is supporting the White Ribbon campaign and the many people and organisations who say no to domestic violence.

As part of White Ribbon Day, men and women around Australia are encouraged to wear a white ribbon to demonstrate their support for the White Ribbon Campaign. White Ribbon Day is Australia’s longest running campaign to stop violence against women and is led by thousands of male Ambassadors.

Relationships Australia (SA) will be getting involved in the following ways:

Chair of Relationships Australia’s National Board, Mat Rowell said: “White Ribbon Day is so important because it shines a light on a topic that is all too often swept under the carpet. It is a way for people to start much needed discussion on domestic violence, an issue that affects an incredible number of people, yet is very difficult to talk about.”

“Domestic violence has a major impact on many of the women and children we see at Relationships Australia. It often extends past physical abuse, as on-going mental abuse and controlling tactics can be equally harrowing for the victims. There is never any excuse for threatening, abusive or violent behaviour, no matter how angry or frustrated someone is,” Mr Rowell said.

It’s well recognised that women are at the greatest risk of violence from people they know, and often within intimate relationships. People turn a blind eye to ‘domestic violence’ where they wouldn’t tolerate an ‘assault’ on the street. They are the same thing.

Healthy relationships are built on the values of equality and respect. In a healthy relationship, power is shared and there is no attempt to make one partner subject to the will of the other. Non-violent communication is used to resolve conflict and when people need support to work through relationship roadblocks, they get it.