Relationships Australia South Australia supporting you through change.
You are here: Home > Because of her, he can!
Posted on July 10, 2018 in Couples & Families, Parenting, Education and Training, Aboriginal and Torres Strait Islander, Latest News, Communities, Children & Young People 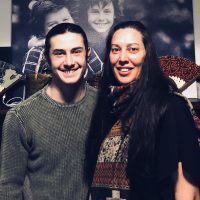 It’s no accident that Connor, a Kuyani Arrernte man entered the community services sector, for his Mum, Erin Woolford was his ‘childhood hero’.

In reflecting upon the theme for NAIDOC Week 2018 ‘Because of her, we can’, Connor is clear about his mother’s influence and dedication to helping others that continues to shape his career pathway.

Erin Woolford, a Kuyani Arrernte Woman, entered the community services sector after leaving school and has worked tirelessly for her people for over 20 years. In that time Erin has been ‘a big voice for Aboriginal People’. Her work spans across the APY Lands and she was influential in recruiting Aboriginal People at Roxby Downs mine.

Connor speaks proudly about his mother’s achievements which include being awarded; the Woman of Achievement for Advancing the Status of Women; the Premier Award for Excellence in Social Inclusion; High Commendation for Contribution to Communities at BHP Billiton’s Global Awards and the SACOME Exceptional Woman in South Australian Resources.

Connor shared how ‘his Mum has always been his number one role model’ and has inspired him to take the path of helping others.

Connor is doing a traineeship and has gained work at Relationships Australia SA as a Client Services Officer. Now, that he’s working in the sector that his mum knows so well, conversations about work between Connor and his Mum continues to provide support and guidance to him, in this often complex and challenging work.