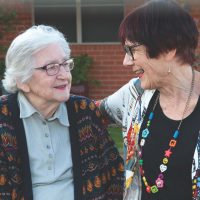 Good neighbours are wonderful to have, but can they also be the difference between life and death?

Leah found herself in such a situation not long ago with her next door neighbour, Derek, when she returned home late one night to find Derek’s garage door left open.

“I thought it was strange when it was still open at 2pm the next day,” said Leah. “I’ve lived next door to Derek for 16 years and it was unlike him. I knocked on his door with no answer, then checked with other neighbours to see if they had seen him around.”

With still no sign of Derek later that evening, Leah called for a welfare check from the police. After investigating, the police broke into Derek’s house to find him lying unconscious on the floor. Derek has suffered a massive stroke nearly 30 hours beforehand. He was rushed to the hospital for treatment and miraculously recovered with very few complications.

“Before this happened, I didn’t even know Derek’s last name,” said Leah. “All I knew about him was that he was a Sturt Football Club supporter, we would often chat about that.”

Leah says that while what happened was nearly a tragic situation, it has also brought her neighbourhood closer together.

“We’ve exchanged numbers and gotten to know each other better. While Derek was recovering in rehab, we took turns looking after his garden. Another neighbour is organising a street party later this year. It’s been really good because this has united people in our community to look out for one another.”

Connecting with those who live around us is important, no matter where you live. Social connection not only makes us feel better by preventing loneliness, isolation and depression, but getting to know our neighbours can also prevent tragic outcomes in stories like that of Leah and Derek.

Neighbour Day, Australia’s annual celebration of community, came about after a similar situation made the news in 2003. Andrew Heslop founded Neighbour Day after hearing about the story of Mrs Elsie Brown, an elderly woman who had been dead for two years in her suburban home before being found. Neighbour Day has since progressed from a reminder to connect with elderly neighbours to an annual celebration of strong communities and friendly streets. People of all ages participate because everyone, everywhere is a neighbour no matter where you live or your personal circumstances.

Neighbour Day is just around the corner, held this year on Sunday, 26 March. It is the perfect way to say thanks for being a great neighbour or to get to know others in your community. Visit the Neighbour Day website to learn more about organising an event in your neighbourhood.

If you or someone you know needs support or help negotiating complex issues to ageing, our Elder Relationship Services can help. Visit the webpage for more information.