Relationships Australia South Australia supporting you through change.
You are here: Home > From FLO to GO: A Conversation with Bella
Posted on December 14, 2017 in Children & Young People, Schools, Latest News, FYI Service 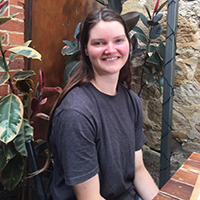 We recently sat down with Isabelle “Bella”, a FLO student at Future Youth Initiative/Schools, Community, Innovations and Learning Service to talk about her new chef apprenticeship at Lenzerheide Restaurant and to ask about  her experience as a student at Marion FYI/SCILS.

From a year of ‘lock in’ at home, to being an active participator at the  FYI Café as a chef and kick boxing enthusiast, Bella spoke about her pathway to success. It quickly became apparent that it was important to Bella to share her experience so that it might help others.

Q: Tell us about your experience in the FYI. How did you end up in FYI- SCILS?

I guess the school organised it. I stopped going to school half way through year 8. I kept getting into trouble and getting into fights. I got sick of people and I thought **** it. So, I just stayed at home, locked in, and didn’t do much. I watched 12 seasons of NCIS.

Q:  I know around that time of lock in you had had a tough time and experienced some loss. Would you say you were recovering or hiding? Did it help you to leave school at that time, to stay at home?

Honestly, not really. I didn’t care about anything or anyone. I didn’t care what happened to me. I wouldn’t have cared if I died or anything. I just felt empty. I was being a douche bag.

Q: So what happened, how did you get out of the house?

Tania. She was crazy. Well, not really crazy, she just wouldn’t leave me alone. She came to the house and kept ringing the doorbell. Then, in 2015, she talked me into going to FLO once a week so she could work with me one on one. That’s when things started to change.

Q: Could you tell us a bit about that change? Was it a slow gradual change or a lightning bolt moment or something else?

I was in a bit of trouble.I realised that if I didn’t change, nothing was going to (change), and life wasn’t going to be good. I started accessing different services, and that helped. I stopped being angry and started to feel like I was returning to my old, caring self. I started channeling my anger into fueling myself and doing something constructive. It really helped. Martial arts and physical activity were a part of that. Initially I wanted to join the army because of that. I thought the physical activity and structure would help me and that the discipline would be good. They kind of map out your future for you.

The thing that really helped me were the people – Tania, Beau, Natalie and Vicki.

I always loved cooking and had been doing it ever since I was old enough to help out. But I never thought I would be a chef until I started the program and met you guys. My focus was initially on getting fit – to lose the weight I’d gained from doing nothing and get my ass into gear,  get back into club sports that I’d left because I kept fighting and getting angry. But, then I lost energy and didn’t see nearly anyone except family and persistent friends. I think my mum was really worried about me.

I thought FLO was going pretty well, so I asked Tania if I could go to five days a week. Then I started at the FYI Café, and it all went from there. The anger began to clear and I started caring about other people again, about my future and myself. It also really connected me with my memory of my friends and our connection through food. They would be really proud.

Q: What kind of advice do you think would be helpful to other FLO students in similar situations?

The advice I would give is: Don’t eat your feelings. Instead, exercise your anger out. Do something constructive. If you don’t want to leave the house for other people, stop worrying about them and start focusing on yourself. Most of the other people are ****** tossers. And the ones that aren’t? Well, you can change anyone’s mind over time, no matter what you’ve done. If you can’t, it’s not worth worrying about what they think. I wouldn’t change any of the things that I did, or what happened to me. I have become a better person from the changes I’ve made. The hardest thing you could ever do is to change yourself, but I feel strong now and I feel proud, and I didn’t know that I would I feel grateful for that.

Click Future Youth Initiative/Schools, Community, Innovations and Learning Service to learn more what they offer to schools and students.