Relationships Australia South Australia supporting you through change.
You are here: Home > Not all dementia begins with forgetfulness
Posted on April 7, 2015 in Family Forum, Latest News 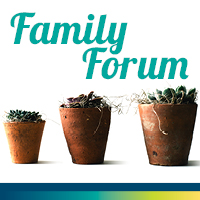 A reader worries about the change of personality of a friend suffering frontal lobe dementia.

Our friend, aged 55, began acting out-of-character, with a complete personality change and loss of inhibitions. His memory was OK, but he had several minor car accidents, and he assaulted his wife. He had never done this before. It was blamed on work stress, but after early retirement he deteriorated further.

Eventually he saw a specialist who diagnosed frontal lobe dementia. Although physically fit and active, our friend was admitted to a nursing home because it was too difficult to care for him at home. It would have saved a lot of heartache if he had been diagnosed earlier. Can the panel elaborate on this condition? We want others to know that not all dementia begins with forgetfulness.

Frontotemporal dementia is the official and preferred  name for frontal lobe dementia, the second most common dementia among younger adults. On average, it appears earlier in life than Alzheimer’s disease or vascular dementia. Patients may be in their 50s or 60s and still working. Memory is unaffected in the early stages, so the “behavioural” form looks like personality change. Initially it is often confused with depression or midlife crisis. Symptoms include impaired judgment, poor self-care, apathy, distractibility, impulsivity, and loss of empathy and inhibitions. Other forms begin with deteriorating language skills. The person is usually unaware of problems and resistant to help. Tragically, family breakdown or violence may occur before the disease is recognised. Some patients (10 to 15 per cent) have a strong family history but for most, the cause is unknown. There is no specific test but a neurologist or geriatrician can check for other causes, organise psychological testing and a brain scan, and make the diagnosis. Treatment is available for some of the symptoms. Support and education for the family is essential. The Alzheimer’s Australia website fightdementia.org.au (phone 8372 2100) and the Australian research website Neura.edu.au provide useful information and guidance on all forms of dementia. The latter hosts a NeuRA Frontier facebook page for carers.