Relationships Australia South Australia supporting you through change.
You are here: Home > 25th Anniversary of Pokies in SA
Posted on July 31, 2019 in Latest News, Gambling 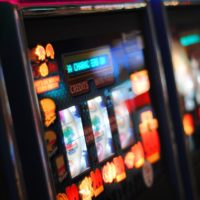 It’s been 25 years since pokie machines were introduced to South Australia, but how much do you know about the pokies?

In Australia, poker machines are legally required to return a percentage of the money put into them, and in South Australia, that figure is set at 87.5%. So, on average, a punter walking into a gaming room will leave with almost 13% less than they came in with, and that average over thousands of dollars of bets means some players end up losing much more money than they can afford. In 2016, pokies in Adelaide alone earned nearly $200 million in bets, and it’s estimated that around 40% of that revenue came from people experiencing gambling harm. In fact, of all forms of gambling, pokies have the highest rate of gambling harm associated with them, with 85% of people experiencing gambling harm playing pokies.

But when does gambling become harmful? And how can you tell?

Gambling becomes an issue when it is harming a person’s life. This harm can come in many forms; such as debt, loss of house, breakdown of family and friend relationships, issues with mental health, depression, anger, and even suicide. When someone is spending more money and time on gambling than they can afford, when they have unpaid bills or increasing debts due to gambling, if they are becoming withdrawn socially, secretive about their activities, or have unexplained moodiness, it could be a sign that they are experiencing gambling harm.

While pokies can be just a form of entertainment for some people, keep in mind that pokies are made to make money, not give it. With that fact in mind, everyone should be aware of how much betting really costs, and how much harm gambling can cause.

If you or someone you know are experiencing gambling harm you can contact the gambling helpline on 1800 858 858 (24 hour/7 days).
Alternatively, you can contact Relationship Australia South Australia’s Gambling Help Service on (08) 8223 4566 (business hours) to make an appointment, or visit https://www.gamblinghelpsa.org.au for more information.